The General Equilibrium Model for Economy-Energy-Environment (GEM-E3) is a multi-regional, multi-sectoral, recursive dynamic computable general equilibrium (CGE) model which provides details on the macro-economy and its interaction with the environment and the energy system. It is an empirical, large scale model written entirely in structural form. It is well suited to evaluate climate and energy policies, as well as fiscal issues.

The GEM-E3 model has been used for several Directorates General of the European Commission, as well as for national authorities. The GEM-E3 modelling groups are also partner in several research projects, and analyses based on GEM-E3 have been published widely. 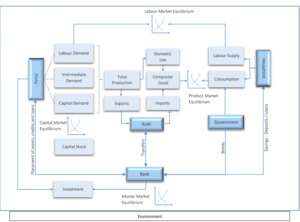