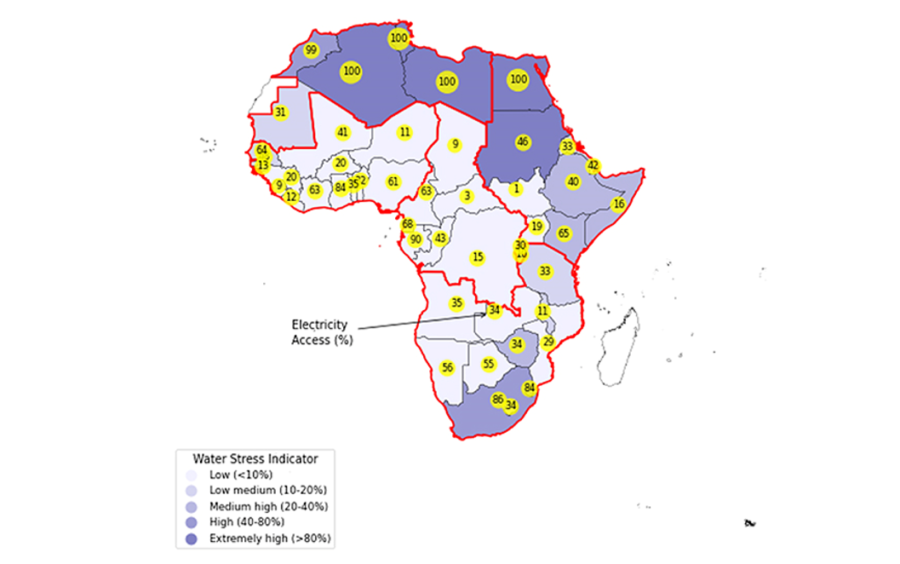 Africa’s economic and population growth prospects are likely to increase energy and water demands. This quantitative study shows that energy decarbonisation pathways reduce water withdrawals (WWs) and water consumption (WC) relative to the baseline scenario. However, the more aggressive decarbonisation pathway (1.5 °C) leads to higher overall WWs than the 2.0 °C scenario but lower WC levels by 2065. By 2065, investments in low-carbon energy infrastructure increase annual WWs from 1% (52 bcm) in the 2.0 °C to 2% (85 bcm) in the 1.5 °C scenarios of total renewable water resources in Africa compared to 3% (159 bcm) in the baseline scenario with lower final energy demands in the mitigation scenarios. WC decreases from 1.2 bcm in the 2.0 °C to 1 bcm in the 1.5 °C scenario, compared to 2.2 bcm in the baseline scenario by 2065, due to the lower water intensity of the low-carbon energy systems. To meet the 1.5 °C pathway, the energy sector requires a higher WW than the 2.0 °C scenario, both in total and per unit of final energy. Overall, these findings demonstrate the crucial role of integrated water-energy planning, and the need for joined-up carbon policy and water resources management for the continent to achieve climate-compatible growth.

This study builds on past work by providing a quantitative multi-annual analysis estimating energy requirements, WW and consumption, carbon dioxide emissions, and costs of covering the future needs of the energy system in Africa, including trade links among the African nations. A continental-scale analysis captures the disparities in energy and water resources between nations and resulting energy trade flows, essential for understanding a cooperative whole-Africa response to climate change.

The energy systems of forty-eight African countries, with a focus on the power sector, are modelled individually using OSeMOSYS, an open-source cost-optimization modelling framework.