TERI’s MARKAL-India model is a bottom-up customised MARKAL model for the Indian energy and environmental policy context. It is based on a rational expectation hypothesis of inter-temporal optimisation with perfect foresight. The energy service demands are estimated in useful energy terms and supply is met through all energy technologies available currently and forecast for entry in India. The model works out the most optimal set of choices based on minimisation of the total discounted system cost of the energy sector under various scenarios. The MARKAL-India model is a dynamic LP (linear programming) model of the Indian energy system. It uses LP methods to solve for the technology mix that best meets the specified objectives. It is demand-driven and feasible solutions are obtained only if all specified end-use energy demands are satisfied for every time period. The end use demands for each sector and for each time period are exogenously estimated. The elements of the model simulate the flow of energy in various forms (energy carriers), from the sources of supply (import, export, mining, and stockpiling) through transformation systems (resource, process, conversion, and demand technologies) to the devices that satisfy the end-use demands.

The model runs over a 50-year period, from 2001 to 2050, at five-year intervals. In the model, the Indian energy sector is disaggregated into five major energy consuming sectors, namely agriculture, commercial, industry, residential, and transport. Each of these sectors is further disaggregated to reflect the sectoral end-use demands. On the supply side, the model considers various energy resources that are available both domestically and from abroad for meeting various end use demands. These include both the conventional energy sources, such as coal, oil, natural gas, hydropower, and nuclear power, as well as renewable energy sources (RES), such as wind, solar, biomass, and so on. The availability of each of these fuels is represented by constraints in the supply side. The relative energy prices of various forms and sources of fuels dictate the choice of fuels, which play an integral role in capturing inter-fuel and inter-factor substitution within the model. Some of the studies that have used TERI’s MARKAL model include TERI (2006; 2012; 2013; 2015), Sachs et al. (2014), and Sharma and Kumar (2016). 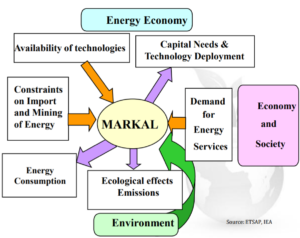