The computation of long term economic pathways and the assessment of sustainable development policies require models able to embark information and expectations from economists, engineers, earth scientists and stakeholders. CIRED has drawn the architecture of modelling IMACLIM in order to cope with this scientific challenge at the interface of environment and development issues, in particular to assess climatic and energy policies.

It relies on a hybrid model which combines a macroeconomic approach with sectional-engineers views. The model is currently available in a static version, IMACLIM-S (Ghersi and Hourcade, 2006), and a recursive version IMACLIM-R (Crassous and al, 2006, Bibas et al., 2015, Hamdi-Chérif et al., 2016).

The IMACLIM-R model is a hybrid dynamic general equilibrium model of the world economy that covers the period 2001–2100 in yearly steps through the recursive iteration of annual static equilibria and dynamic modules. The annual static equilibrium determines the relative prices, wages, labour, value, physical flows, capacity utilization, profit rates, and savings at a year t as a result of short-term equilibrium conditions between demand and supply of goods, capital, and labour markets. The dynamic modules are sector-specific reduced forms of technology-rich models, which take the static equilibria at a year t as an input, assess the reaction of technical systems to the economic signals, and send new input–output coefficients back to the static model to allow computation of the equilibrium for year t + 1. 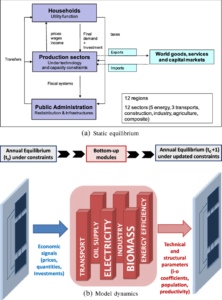 Imaclim-NLU is intended to study the interactions between energy systems and the economy, to assess the feasibility of low carbon development strategies and the transition pathway towards low carbon future.

More information on Imaclim-NLU is available on the IAMC Wiki page.