Report: Getting to 30-60: How China’s Biggest Coal Power, Cement, and Steel Corporations Are Responding to National Decarbonization Pledges 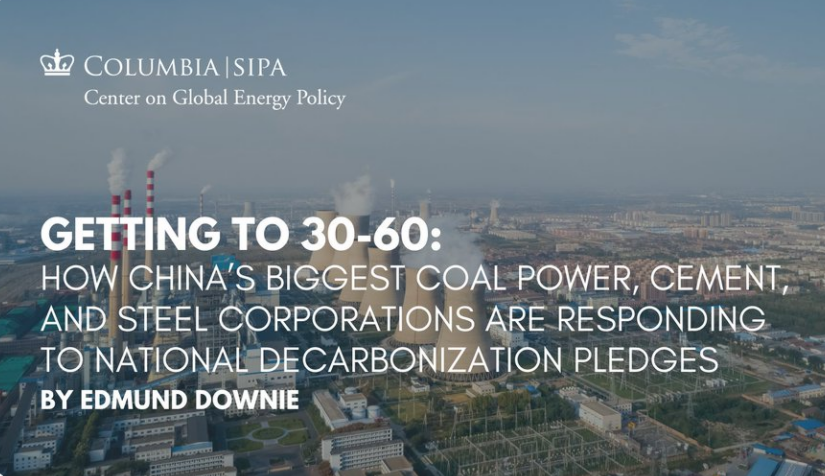 Report: Getting to 30-60: How China’s Biggest Coal Power, Cement, and Steel Corporations Are Responding to National Decarbonization Pledges

The Center on Global Energy Policy at Columbia University SIPA has published a report on “Getting to 30-60: How China’s Biggest Coal Power, Cement, and Steel Corporations Are Responding to National Decarbonization Pledges”.

In September 2020, China announced its intentions to peak carbon emissions by 2030 and achieve carbon neutrality by 2060. The neutrality goal in particular was a breakthrough for global climate ambitions: a net-zero target from the world’s largest emitter, responsible for around one-quarter of global greenhouse gas (GHG) emissions.

The two new goals—referred to in Chinese policy discourse as the “30-60” goals—are not China’s first public targets on GHG reduction. They are, however, the centerpieces of a new Chinese climate policy in which GHG cuts are a standalone goal rather than an ancillary benefit of more immediate priorities like energy efficiency and industrial upgrading. Prior approaches had required little engagement from firms in carbon management. Indeed, none of the largest Chinese firms in the coal power, cement, and steel sectors had publicized quantitative targets for reducing or controlling carbon emissions before the government announced the 30-60 goals. They faced little pressure to do so; authorities pressed firms in climate-adjacent areas like reducing air pollution rather than carbon management. The 30-60 announcement appears to mark a break from this era, forcing firms to adjust accordingly.

This report assesses how China’s high-emitting industries have responded to the 30-60 targets and the accompanying elevation of climate within national policy priorities. It focuses on corporate and sectoral emissions reduction targets through June 2021 among 30 major firms in three of China’s largest sources of direct emissions: coal power generation, cement, and steel.